January Player of the Month

It's time to vote for the Player of the Month for January. It has been a much better month with some great performances both in terms of the team and also individually.

You can vote on Facebook, Twitter or by e-mailing us at fans@trustinyellow.com. The deadline for voting is 12pm Saturday.

We are also looking for any young fan who would like to present the award at the game on Saturday against Telford United. Please contact us for more information.

We are pleased to confirm that club chief executive, Natalie Atkinson, and director, Ian Kyle, will be attending the next Trust members' meeting to meet with supporters and discuss the developing changes at the Club.

A reminder that this will take place on Tuesday February 6 at Southport Railway Club, Sussex Road. The meeting starts at 8pm, and all members and prospective members are welcome.

Our next members' meeting will take place on Tuesday February 6 at the Southport Railway Club, Sussex Road. The meeting starts at 8pm. All members and prospective members are welcome. Any items for the Agenda should be sent to fans@trustinyellow.com by January 30.

Minutes of January Board meeting

The minutes of the Trust's Board meeting on January 9 are online HERE.

December Player of the Month 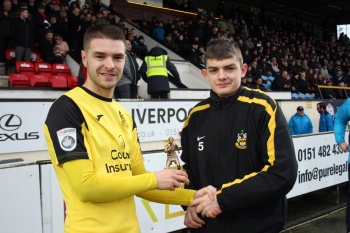 Jason Gilchrist has been voted the Trust in Yellow Player of the Month for December.

Gilchrist, who signed for Southport from FC United of Manchester in November, scored four goals during the month, including a hat-trick at Tamworth.

The striker has impressed with his clinical touch in front of goal and came out on top in the supporters' poll.

He was presented with his award ahead of the New Year’s Day win against Chorley by supporter Conor Hartwell.