Due to a lack of bookings there will be no supporters' coach to Bromley.

The FA Trophy tie at Dover is on January 16th. The fare is £29 for Trust members, £22 for junior members and £34 for non-members. We are waiting for confirmation from the coach company but it will have an early morning departure time.
A decision will be made on Saturday as to whether it is viable to run this coach so please book now if interested.

We are now taken bookings for the Supporters' coach to Chester in the New Year.

With some incredible performances on the pitch places are expected to be taken up quickly. The coach will have the usual pick-up points & will leave the Merseyrail Community Stadium at 12.00.

The dates will be from Friday, 18th March to Sunday, 20th.
The quote we have had is from ALFA who not only run coaches but can organise hotels in certain resorts including Torquay.We would leave early on the Friday morning as obviously it is a much longer trip.The hotel is the Regina which is near the seafront.The price of bed and breakfast in a double or twin room and including coach travel to and from Torquay and during the weekend is:-
£84 (if 40 book) and £94 (if 30 book). There would also be a charge of £12 for insurance unless you had proof you had your own travel insurance   (A single room would cost an extra £15)
We require firm bookings by Tuesday 19th January with a deposit of £40 within seven days of that to meet Alfa’s terms and conditions. We would require a minimum of 30 people to be able to make the booking.Deposits would be lost if the bookings were cancelled due to postponement because of bad weather or either team being in the FA Trophy semi-final which is on that day.
If you require any further information please call it at the Trust Office on match days or contact Martin Robinson at dmjrobinson@btinternet.com
Continue Reading 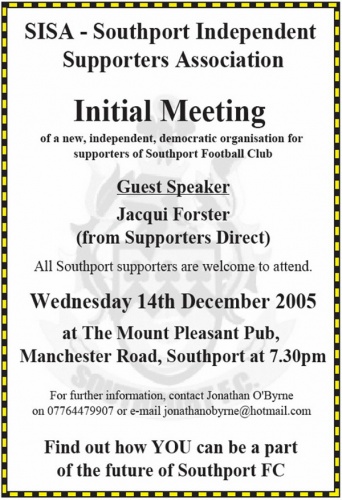 Ten years ago today, on December 14 2005, the first public meeting was held for the proposed Southport FC supporters’ group.

The meeting was held in the function room at the Mount on Manchester Road, and those present elected to call a further meeting to determine whether the club’s supporters and the surrounding community wanted to form a trust.

The meeting was the first in a number of key events which, as interest mounted over the following months, culminated in the formation of Trust in Yellow in April 2006.

Above is the poster from the initial meeting and pictured below at the meeting are Jonathan O’Byrne, the Trust’s first chairman, and Jacqui Forster, from Supporters’ Direct, who both addressed the fans present.

The Trust is very proud to be celebrating its tenth anniversary in 2016 and we look forward to marking the milestone in several ways during the coming year. 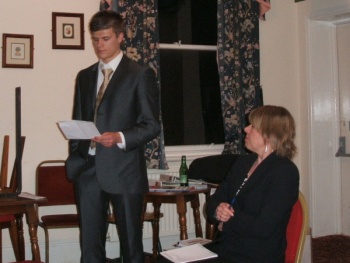 The Mark Heaton tribute night took place after the match against Cheltenham Town on November 14 and was a great success. The amount raised for Marie Curie is to be confirmed but it is hoped that the final figure will be over £1,000. The money will go directly to the Walton Centre, who cared for Mark.

A special thanks to Howard for all of the work involved in organising the event and to everyone who helped on the day.

The initial batch of 50 calendars for 2016 have sold out and a second batch of 50 is now on sale. Thanks to Alan for producing the calendar which all agreed were excellent and should become an annual feature.

Thanks to Rob Urwin for arranging the quiz in the Grandstand Bar before the televised match against Eastleigh.

The club is yet to request the balance of the funds for the Trust’s contribution towards the floodlights project. The Trust has currently paid around 25 per cent of its total contribution.

A cheque for £255 has been paid to MacMillan Cancer Support in relation to the funds raised from the paintings which were auctioned at the 2005 reunion.

The current membership is 220.

Rob English will be visiting the club so plans can be put together for the proposed bar behind the Jack Carr Stand. The club and disabled supporters will be consulted about the possibility of improving disabled facilities. It was agreed that these are the two ideas which will be considered with a view to deciding the next project to undertake.

Comments have been made in relation to poor state of the toilet facilities at the ground, particularly the ladies’ toilet, and these will be raised with the club.

The Trust remains keen to use the Premier League Fans Fund to employ someone on a part-time basis which would be mutually beneficial for the Trust and club.

The fare to the match at Wrexham on Boxing Day is £10 members, £13 non-members. The coach departs at the earlier time of 11.30am. The Trust has been contacted by the landlord of the Black Lion, Wrexham, who welcome visiting fans. They have Sky Sports, a large selection of beers and are offering fans free sausage and chips and a free shot.

Initial costings have been obtained after the possible destinations for the weekend trip were narrowed down to two. A visit to Lincoln on the weekend of February 21 is likely to cost £110 per person for 40 people and £120 for 30. The notice period for a full refund from the hotel is 14 working days.

A weekend in Torquay for the match on March 19 would cost £84 per person for 40 people, and £94 for 30.The Trust would be liable for the full cost in the event of a cancellation within a couple of weeks of the match. This match clashes with the date of the FA Trophy semi-final second leg.

Now costings have been obtained, members will be asked for their thoughts to gauge the likely interest before a decision is made.

6. Programme of events and fundraising activities

A family Christmas party will be held after the match against Bromley on December 19. It will include music, party food and games, presents for children and the chance to meet Father Christmas. Thanks to John Wood of Mecca Bingo who has donated 200 Christmas hats for the party.

Proposed events in the New Year include a FIFA night, visit to the Parker Brewery, legends’ night and end of season awards. The Trust is liaising with Geoff Wilde in relation to the proposed legends’ night. Dates for these events will be confirmed shortly.

This coming year, 2016, sees the Trust celebrate its tenth anniversary. Local schools and youngsters have been invited to take part in a competition to design a celebratory badge for the year ahead and the badge should be in place by the end of January.

The Trust will contact the club regarding an official switch-on for the new floodlights.

There have unfortunately been production issues in relation to the plaque for the Trust office in memory of Phil Carder but it is hoped the plaque will be ready soon.

Members were disappointed to hear that Champion reporter Ron Ellis has recently had his press pass withdrawn by the club. The Trust would welcome a response from the club to clarify the situation. Martin, as chairman, will contact Ron, as a Trust member.

The Trust has been contacted by a member offering to help both the Trust and Club with the quality of their communications. The Trust is keen to accept the offer which will also be forwarded to the club.