The board of Trust In Yellow have very regrettably been forced to cancel the proposed trip to Bristol on the weekend of the 11th April for our match at Bristol Rovers.

Unfortunately bookings did not match those for similar weekends in previous years and faced with a potential loss of up to £1000 it was felt that to be fair to all members of the Trust there was no alternative than to cancel the trip.

We are extremely sorry and apologise to those people who have booked and were looking forward to the weekend.

Any deposits made can be collected from the Trust Office at the next home matches. If this is inconvenient then please contact the Trust Treasurer, Colin Aindow at caindow@googlemail.com

For those still going independently the hotel we were going to was Bristol Central Travelodge. They obviously now have vacancies but unfortunately not at the reduced rates we had negotiated.

Any member wishing to discuss the trip can contact Martin Robinson, Vice Chairman at dmjrobinson@btinternet.com or ring him on 01484 719449.

Again our sincere apologies to those people disappointed by this cancellation

SHAVE IT OR SAVE IT - THANKS TO STEVE WIGNALL 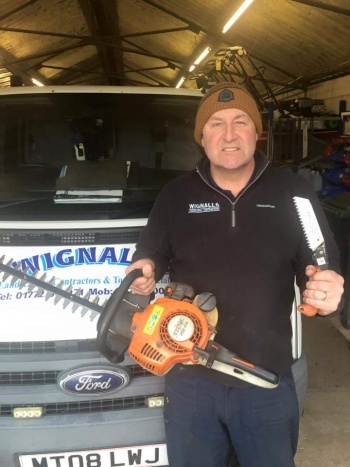 The Trust would like to thank Steve Wignall for his very generous donation to the Shave It Or Save It campaign. Steve, a great supporter of the club and the Trust, has also persuaded his good friend the Mad Barber of Bretherton, pictured above, to perform the shave.

You can donate to Shave It Or Save It in any of the following ways:

- Call in at the club shop or Trust office at the matches against Halifax Town on 3 March or Nuneaton Town on 6 March and put your money in the yellow tin to shave it or black tin to save it.

The deadline for donations is 8th March.

The major issue is gaining access to the bank with money being able to be paid in but not accessed by the Trust. Obviously this affects the day to day operations of the Trust and steps are being taken to resolve this issue as quickly as possible. Colin has agreed to step into Phil’s role as Treasurer on a provisional basis. Donations totalling a superb £708 were received in memory of Phil and this money will go towards purchasing something in his memory. The proposed Celebration Wall was discussed and Martin will do more research on it with Rob Urwin and report back. The Goal of the Season Trophy and the plaque in memory of Phil have been purchased.

Bill reported that Trust membership is now at 220 with 47 new members having joined between the period of 1st February to the 31st January. The Trust now has 1310 followers on Twitter.

All Board members agreed that communication must be improved and an acknowledgement of an e-mail received should be made within 24 hours. Phil#180;s death has highlighted the need for new Board members with fresh ideas and skill sets. There are a few interested parties and they will be spoken to shortly. New roles such as a Projects Co-ordinator were discussed although it was agreed that it would be unfair to burden current Board members with either too many roles or roles that they aren´t keen on taking on. This heightens the need for a larger committee.

We are now into the final fortnight for donations so this will be pushed as much as possible in the media. Steve Wignall, who will be shaving the beard, has made a very generous donation and his company´s details will be added to the Trust website´s Partners Page as a thank you.

As a result of the very difficult last 6 weeks it was agreed to put the Race Night back to Easter Monday after the Telford game. This will allow more time for arrangements to me made and sponsorships to be sold and will hopefully generate more interest with what is usually a larger crowd for a Bank Holiday game. Tony Adams will host as usual and it is hoped the players and management will attend.

The 04/05 Reunion looks likely to take place on Sunday 26th April although this is yet to be confirmed. After the match there will be a buffet, quiz and Q&A session in the Grandstand Bar. Preliminary pricing is £25 for a place on the supporters team and £5 admission for spectators including access to the buffet afterwards. Once these details have been confirmed the event will be publicised.

9. Cooperation with the club

There was a discussion about how more pressure could be put on the club in the future to avoid another floodlights situation. It was agreed that there would be a deadline put on any future purchases whereby funding would be withdrawn if the project wasn´t completed by an agreed date. A balance needs to be sought between being too reticent and too militant which may alienate the club.

With Alan S being away Nicola Hudson has very kindly agreed to run the Wrexham coach. Thanks must also go to Arthur for being extremely patient while the banking issues are sorted. There are around 26 names down for the Bristol weekend with 40 being needed for confirmation at the end of March.

It was agreed that the Vanarama Big Day out offer should be publicised more to southern exiles who are more likely to travel to Wembley than those living in the Southport area. Voting for the February Player of the Month has now opened.

SHAVE IT OR SAVE IT - TIME'S RUNNING OUT FOR DONATIONS! 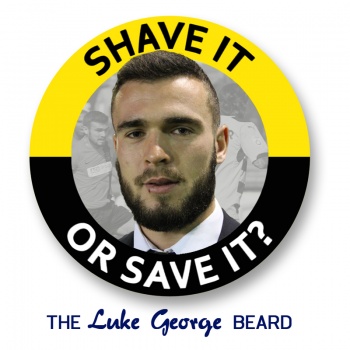 Trust in Yellow has been very pleased with the response to the fundraiser launched with midfielder Luke George and Diabetes UK.

There is now less than a fortnight remaining to make a donation, as the total amount raised will be added up at the end of the first week in March to decide whether Luke's beard is shaved or saved.

The Trust is giving fans the ultimate say on whether Luke’s trademark beard should stay or go while also raising funds in the process.

Supporters are being asked make a donation based on whether they think the beard should be shaved or saved, and whichever raises the most money by 8 March will win.

There are only two home matches remaining during the campaign, so please donate in person or online using the details below.

All funds raised will be split equally between the Trust and Diabetes UK.

The campaign has received good publicity in the press and was also discussed during Luke's interview with ITV Granada Reports in their feature ahead of the FA Cup match against Eastleigh.

You can watch the ITV interview here: http://www.itv.com/news/granada/update/2014-12-05/fa-cup-superheroes-ready-for-action/

You can donate in any of the following ways:

Regardless of how you donate or which option you choose, the funds will be split equally between the Trust and Diabetes UK.

You can make a one-off donation or simply bring in your loose change whenever you pass on a matchday.

The campaign is all a bit of fun so please get involved. Thanks for your support

FAN OF THE SEASON 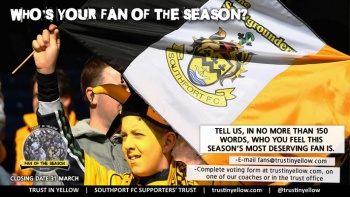 Following the success of the first competition last season, TIY is pleased to announce that it is again running a 'Fan of the Season' competition.

We are looking to recognise a supporter who has made that special extra effort to give loyal support to the players and team at matches in season 2014/15. So this is not just about that band of fantastic people who give hours of their time in voluntary work for the club and without whom the club couldn’t be successful. We are sure the club has ways of recognising their efforts.

Our 'Fan of the Season' competition is for any supporter who has gone that extra mile this season in following and supporting their team . Do you know someone who you think has shown a special passion for the club? Is there someone within the Southport FC fan community who is an unsung hero deserving recognition? If you know such a person then let us know.

Email fans@trustinyellow.com, telling us in no more than 150 words how you have been inspired by someone else's commitment.

Alternatively you can download the NOMINATIONS FORM HERE and return it to us in person at the Trust office or club shop, by e-mail or by post using the details on the form.

The closing date is TUESDAY 31 MARCH.

The winner will receive their trophy at the end of season presentation evening when the various players’ awards are given out.