2. Brief review of Trust's activities during the year

The meeting began with a minute's silence in memory of Phil Carder. Martin then gave a review of the last year explaining the impact Phil’s death had had on the Trust not only on a personal level but also on an organisational level. He then told members how the Trust had rallied round since then with the floodlights project now being completed, a regular programme of monthly events and much improved communication.

Before a demonstration of the new lights, Charlie Clapham addressed those present and thanked all those involved for their hard work. He spoke passionately about his role as, first and foremost, a supporter of the club and said lessons had been learned about the length of time this project had dragged on for. He then took a variety of questions from supporters, not only about floodlights but also concerning communication, health & safety regulations and the club's own vision for stadium development. Charlie stated that once the next project had been decided on between club & Trust, a deadline for completion would be decided on and the club would match any amount raised by the Trust. There then followed a demonstration of the impressive new lights which will hopefully be ready for use in time for the Chester game although Charlie did stress that the club will not accept ownership from the contractor until they were 100% satisfied they were operating at peak efficiency.

Colin reported that the Trust’s current balance stands at £24,376.18 including net funds available of £24,121.18. A total of £7174 has been paid to the club as part of the Trust's contribution to the floodlights project, which represents 25% of initial costs. The funds in the Cambridge & Counties term deposit have now been transferred to the Trust's account and earned £202.25 in interest. Colin also explained that Paypal charge an admin fee of 54p for each £10 membership renewal completed online.

Bill reported that active membership stands at 215 although there are almost 30 memberships which have recently expired so this number will hopefully grow again in the coming weeks. The target for membership this season is 250 which will be promoted at Trust events and it was encouraging that there have been 34 new members joining since January.

6. Election of board members

A plaque in memory of Phil Carder will be put up in a couple of weeks on the wall behind the club shop. Phil’s nephew Jacob Smith ran the Great North Run raising over £520 for Leukaemia charity Bloodwise. There was a break in at the Trust office last week but fortunately nothing was stolen.

Noel spoke about the Trust's programme of events and reiterated what a superb day the 04/05 Reunion was. The Quiz Night was also a success and all horses and jockeys have now been sold for the Race Night which will hopefully be well attended and raise some money for the Trust. Howard informed those present of the Mark Heaton tribute night in November which will raise funds for Marie Curie. The Trust’s programme of events for the New Year will be confirmed in the next couple of months.

Members present were given a sheet detailing possible destinations for this season's weekend trip and the risk that goes with some of them with regards to clashes with the FA Trophy. The Trust will gather members' feedback and look to make a decision around December time. With regards to regular travel this season coaches have been run to five of the eight away fixtures so far albeit at a small loss. It is hoped that an upturn in results will boost travelling numbers.

10. Future projects and priorities for the Trust

There was a discussion with members about what they would like the Trust's next project to be. The most popular suggestions were improved disabled facilities and a bar behind the Jack Carr Stand. Both of these would improve the matchday experience, attract floating supporters and the bar would generate revenue. Also mentioned was improved toilet facilities and cover for the Blowick End and Popular Side, although the latter would have a much longer timescale for completion. The Fans Fund Small Grant Scheme is an option to provide funding for some of these projects although total costs must not exceed £50,000 to be eligible.

The Trust has been given a Friday evening slot on the new Sandgrounder Radio to promote activities and there will also be live updates from matches whilst the station is broadcasting. The Trust in Yellow username has now been registered on Portchat also to help with promotion and communication. A question was raised about the effectiveness and value for money of the next match signs and it was reiterated that this is something that the Trust is looking into long term.

AGENDA FOR TRUST AGM ON WEDNESDAY

All Trust members are welcome to attend our AGM on Wednesday which will include a demonstration of the new floodlights and a chance to ask questions about them.

If you are not a member but wish to attend then you are more than welcome to join on the evening.

The agenda is below

2. Brief review of Trust’s activities during the year.

There will be a demonstration of the new lights in operation followed by the chance to ask Charlie Clapham questions about them.

6. Election of board members.

10. Future projects and priorities for the Trust.

VOTE FOR YOUR SEPTEMBER PLAYER OF THE MONTH

It's time to vote for who you think was the September Player of the Month. To cast your vote tweet us @trustinyellow, e-mail fans@trustinyellow.com or text 07861 416859. Voting forms will also be available at the AGM on Wednesday.

Voting closes at 6pm on Friday and the award will be presented on the pitch before Saturday's match against Torquay.

The next of the Trust’s monthly Saturday night events is on October 10 after the home match against Torquay United and is our popular annual Race Night and Meet the Players. It will start at 5.30pm.

We are looking for sponsors for the night. To sponsor the event will cost £50, and to sponsor a Race £25. To buy a horse for the races costs just £3 and to become a jockey£2.

To become a sponsor or buy a horse etc, come into the Trust office on match days or see Noel Warham, Martin Robinson or any Trust board member.

You can also contact us by email at dmjrobinson@btinternet.com. 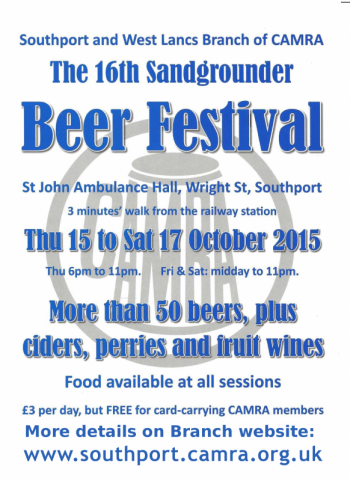 On production of a current membership card, all TIY members will be granted free entry to the Sandgrounder Beer Festival. Our thanks go to Doug Macadam and Dave Williams of CAMRA for this generous offer.
Continue Reading