Including a demonstration of the new floodlights and the chance to ask Charlie Clapham questions about them.

Because of the Fleetwood Lancashire Senior Cup Match the Trust AGM has had to be moved from its planned date. It will now be held on Wednesday, 7th October at 7-30pm in the Grandstand Bar. Calling notices and ballot papers have been sent out to members by email or post.(If you haven't received yours please contact Martin Robinson at dmjrobinson@btinternet.com)

We are pleased that Charlie Clapham has agreed to come to the meeting and the club will demonstrate the new floodlights for Trust members who did so much to make them a reality. Mr. Clapham will also answer members' questions about the lights.

There are several Trust members for whom we don't have up to date details. If you don't receive a copy of our newsletter by email and wish to do so, please send your email address to andrew.kelly199@btinternet.com.

As well as keeping you informed of TIY activities, it will also help reduce our postage costs.

MINUTES OF TRUST IN YELLOW BOARD MEETING - TUESDAY SEPTEMBER 9

Rob English has been co-opted onto the Trust board and will put his name forward for election at the AGM.

The football club has provided the Trust with invoices for initial work relating to the new floodlights. The Trust has in turn paid £7,174 to the club, representing 25% of the initial costs in line with the agreement in place. This breaks down as £3,299 to Surfacelux, the providers of the floodlights, and £3,875 in respect of the ground works.

With the remainder of the Trust’s share likely to be paid shortly, notice has been given for the funds in the term deposit and this will be transferred into the Trust’s current account on October 5.

£255 has been raised for MacMillan Cancer Support for the paintings auctioned at the recent 2005 reunion.

Current memberships stand at 235 with a number of renewals due in August.

The quiz night took place after the match against Dover Athletic and special thanks went to Noel, Howard and Martin for their work organising the event. The Trust was pleased with the turnout, the feedback received has been positive and the event raised £45, which was pleasing as the main aim was to get people involved rather than being a designated fundraiser.

Contact will be made with Paul Carden to invite the players and individual board members have agreed to sell sponsorships. These will then be collated by Martin. Sponsorship of the event is still available for £50, plus two races at £25 each and horses and jockeys for £3 and £2.

Tony Adams has been booked to host the event and thanks go to Rob and Julia Urwin for their help with the arrangements.

The Mark Heaton Tribute Night will be held on November 14 with a karaoke and disco. Noel and Howard will liaise in relation to this event and contact has already been made with Mark’s family.

The Christmas party on December 19 will be targeted at families and junior supporters. Further details will be confirmed nearer the time.

The original date of September 30 has been vacated because of a clash with the Lancashire Cup match against Fleetwood Town. It will now take place on October 7 and Martin will send out the calling notices to members.

7. Relations with the club

The Trust is pleased that progress is now being made with the final stages of the floodlights project and it is expected that the new lights will be in operation shortly.

Members will be asked at the AGM about their thoughts on future projects with the club and the general feeling is that the Trust will look to pursue smaller projects than the floodlights in future. Possible options at this stage include improving disabled facilities and a bar for supporters at the Jack Carr end of the ground.

The board will also consider further the long-term strategy of the Trust, including possibly revisiting the strategic plan document submitted to the club in 2010.

The coaches to the matches at Forest Green Rovers and Halifax Town will run. Although the fares received have not reached the break-even point at the time of the meeting, it is hoped that confirmation of the coach running will encourage further bookings, as has been the case in recent trips.

A Trust member has donated £100 towards the Forest Green coach and although a small loss has been made on travel to date, the board is keen for as many of the early season coaches to run in order to show the reliability of the service following the review in the summer.

Fans will be consulted in the coming weeks about possible destinations for the weekend trip. Possibilities at this stage involve Dover Athletic, Lincoln City, Grimsby Town, Torquay United, Boreham Wood and Aldershot Town, though a major problem is that a number of the matches, including Torquay, clash with FA Trophy rounds so the matches could be postponed.

The board will look to buy a mobile phone so the same contact number can be used for different Trust activities after the recent changes to the board. The Trust will also set up a designated username on Port Chat in order to use the forum to promote activities and events.

The club’s matchday hospitality receives good feedback and it was suggested that the Trust could sponsor a match in order to allow members a chance to use the hospitality, perhaps as a prize in a competition.

Enquiries will be made about possibly publishing a Trust calendar as a fundraiser. Jacob Smith, the nephew of Phil Carder, will run the Great North Run on September 13 in memory of Phil. A plaque for the Trust office to remember Phil will be ordered after the wording was chosen.

MATT CHALLONER IS AUGUST PLAYER OF THE MONTH 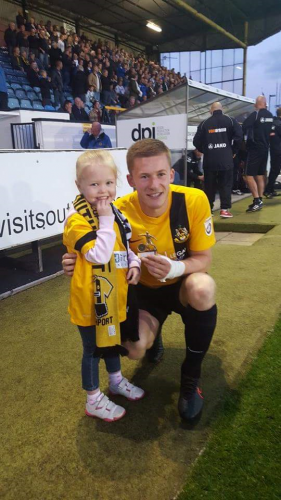 Congratulations to ultra consistent right back Matt Challoner on being August Player of the Month, seen here being presented with his award by one of Southport's youngest fans, Ellie Ryding.

If you would like a junior family member or friend to present a future Player of the Month award, tweet us @trustinyellow or email fans@trustinyellow.com

In January, Trust in Yellow lost a great friend in Phil Carder, a lifelong Southport fan and our long-serving treasurer, who sadly passed away having suffered from leukaemia.

Phil was a true gentleman, he carried out a huge amount of work for the Trust, and he is greatly missed by everyone involved in the Trust and at the club.

This Sunday, Phil’s nephew, Jacob, is running the Great North Run in memory of Phil, with all funds raised going to Leukaemia & Lymphoma Research.

It will be Jacob's first long-distance race and he says it is a fitting opportunity to raise awareness and money to help others affected by leukaemia.

You can support Jacob by sponsoring him on his JustGiving page here https://www.justgiving.com/jakegnr/

All donations will be gratefully received.