Trust In Yellow Weekender to Braintree (and Southend) 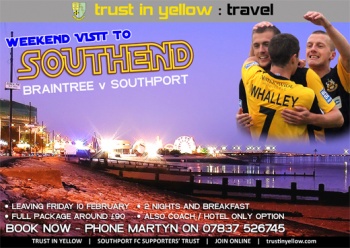 We are pleased to announce 1st details of our weekend away for this season.

Departing Southport on Friday Feb 10th around lunchtime we will head to Southend for 2 nights and stay in a 3 Star hotel on a Bed and Breakfast basis. On the Saturday the Coach will drive us all to and from Braintree for the game.

We are still awaiting quotes from various hotels but we expect the price to be around £90. This is fully inclusive of all coach travel and B&B accommodation.

To secure your place on this trip or if you have any questions you can call Martyn O'Hara on 07837 526745.
We will require a non refundable deposit of £30 to secure you place and will be taking this on the 22nd of October before and after the Tamworth game either in the bar or in the trust office.

Its 1st come 1st served so if you want to come then give Martyn a call to secure your place.

The Race Night held on 1 October was a success, with a profit of £548.82 raised to date and some monies still owed. The Trust would like to thank the players and supporters who attended.

At present the Trust has broken even on the former players’ reunion, with all outgoings met and funds raised from now on will be profit. The Prince of Wales has agreed to reduce the numbers expected to 200.

£1,335 has been brought in through memberships since the start of July.

The pledge scheme continues to be a regular source of income for the Trust, with Steve Wignall thanked for his recent contribution of £ 100  for every goal scored by Simon Grand.

210 is the current membership.

A large turnout is expected from the clubs former Football League players. The Trust will look to find a way of thanking Geoff Wilde for his considerable efforts in helping arrange the event. Trust board members will be available to help on the night.

An event will be considered to tie in with the launch of the floodlights when the likely timeframe becomes clearer. It was suggested the Trust could look to put together a publication to mark the clubs 130th anniversary. Enquiries will be made about costings and sponsorship.

The Trust is keen to make progress with this project and has been in contact with Charlie Clapham to ensure things are moving forward. Mr Clapham has said the club is currently putting the finishing touches to the application for the grant that will be considered by the Football Foundation. He says the bid will be considered at the Foundations next meeting, which the Trust believes will take place later this month. According to the Football Foundation website it takes about 12 weeks for the Foundation to consider a club’s application.

Take-up on the special offer to Mansfield has been good, with one coach now full. A provisional list is being made for a possible second coach, although a minimum of 30 bookings will be required for this to run. The Trust will look to run the coach to Kettering Town on 5 November at £16 for members on the basis of 40 people will travel. Coach travel has made a loss of £104 so far this season.

The Trust will be looking to arrange a weekend trip to the match at Braintree Town on 11 February. Martyn O hopes to publish the details within the next week so supporters can start to make bookings. It is hoped that a package to include travel, bed and breakfast can be arranged for around £90. Martyn is currently in the process of getting quotes from a number of hotels in Southend and Clacton-on-Sea. It was suggested that a sponsored walk could be arranged for the last 10k of the trip. The first instalment of payments will be a non-refundable deposit of £20  to be made at the Tamworth match on 22 October.

The Trust has been asked by the club to support the upcoming Sportsman’s Dinner. While the Trust will not be taking up a table, it will help publicise the event to members.

Liam Watson has completed 250 league matches as Southport manager which is something the Trust will look to recognise. It will also be a way of thanking Liam for his support of Trust events, such as the cricket match, Race Night and quiz night in recent months.

Board (to be confirmed),Members ( 1 December).

Seats on the coach to Mansfield on Saturday 15th October are available for just £12 for the first 49 members who book. Call Alan Scarisbrick on 07980 911 693 or call into the Trust office at the next home game. The coach will depart from Haig Avenue at 11am.

Unfortunately the coach to Forest Green has been cancelled due to a lack of bookings.