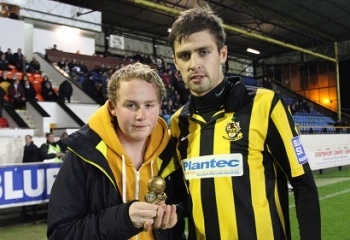 Midfielder Karl Ledsham has been voted Southport's Player of the Month for December by supporters.

Scoring in both FA Trophy matches against Stockport County, as well as forcing a decisive own goal in the league game at Edgeley Park, Ledsham was the clear winner in the poll organised by Trust in Yellow.

He was presented with his award ahead of Tuesday night’s match against Lincoln City by Trust member Ben Highton.

25-year-old Ledsham has netted six goals in all this season, including a memorable winner against Gateshead in September.

He joins Chris Lever and Shaun Whalley in winning the Trust award this campaign.

Trust members will have their next chance to vote in January’s award at the end of the month.