Statement from the Board of Trust In Yellow

The Board of Trust in Yellow realises that it does not speak for ALL members and supporters and feel it is essential that all Southport FC Supporters including those who have drifted away in recent years are able to put forward their views on how we can help get the Club moving in the right direction once again.

As a result we have arranged an Open Meeting on:

7-30pm on Tuesday, 11th April at the Southport Railway Club on Sussex Road

THIS MEETING IS OPEN TO ALL SUPPORTERS

Trust members and non-members, are welcome to attend and we want to see as many fans there as possible who care about the future of Football in this Town..

The object of the meeting will be to discuss:
1. Ideas for the future strategy and direction of the club.
2. How supporter involvement in the club could be improved and what positive benefits this would bring.

The meeting will be Chaired by Martin Robinson from the Trust and after brief opening statements by Trust Vice- Chair Noel Warham and the founder of Trust In Yellow Jonathan O’Byrne, it will be open to all present to add to the debate.

The only condition is that contributions should be constructive and not contain derogatory comments.

We appreciate that not all supporters will be able to attend the meeting and so welcome comments sent in advance to trustinyellow278@gmail.com

We really do want this consultation to be with as wide a range of supporters as possible and we welcome all views and opinions.

These contributions will also be considered when an open letter is written to the Club Board after the meeting.

Exhibition at the Atkinson

Trust in Yellow is delighted to announce that there will be an exhibition about Southport FC at The Atkinson from the end of this month.

The exhibition will feature the entire history of the club but will have a particular focus on the 1966/67 promotion season under Billy Bingham, which this season marks it's Golden Anniversary. It is hoped that this will form the basis of a permanent Southport FC display in the town's museum.

This will be followed in May by an evening event at the Atkinson which will celebrate the promotion season. A number of players have already confirmed their attendance and we will confirm the date and further details in the near future.

We have received a number of offers of donations of memorabilia but would welcome any further offers - whether permanent or for the duration of the exhibition - of any memorabilia from throughout the history of the club.

If you have any items which you would wish to donate, please contact Noel Warham on 07939726286 or nolio@btinternet.com, or via the Trust's Facebook or Twitter pages.

Our coaches to the matches at Braintree Town next Saturday and York City on Tuesday March 21 will definitely be running.

Thanks to Charlie Clapham subsidising the coaches, we’re able to ensure they run at a reduced price.

The fare for the Braintree coach is just £15 members, £17 non-members. It leaves the Merseyrail Community Stadium at 8am.

A reminder that it is against the law to have alcohol on a football supporters’ coach. 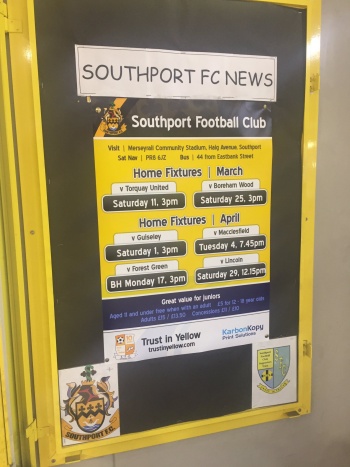 We have a new poster in our display cabinet at Southport station to advertise the remaining fixtures this season.

Thanks to Merseyrail for giving us the use of the space and Karbon Kopy for printing the poster. The poster is by the ticket barriers on the entrance to the platform.