The next of our monthly Saturday night events takes place tomorrow with the very popular Race Night making a return after a couple of seasons.

The evening starts at 5.30pm in the Grandstand Bar and the players will be in attendance so please come along and get involved!

Trust in Yellow would like to thank everyone who attended the quiz night after Saturday’s match against Dover Athletic and helped make it a success.

The Trust was very pleased with the turnout at what was a fun event with rounds on general knowledge, TV and film, music, sport and Southport FC.

Prizes were also given to the teams finishing in second and third place, which were collected by Pam Orme and Mick Hopkins respectively.

The quiz was the latest event in the Trust’s new Get Involved! programme, which continues with a Race Night and Meet the Players after the match against Torquay United on October 10 in the Grandstand Bar.

Mick Hopkins collects the prize for the third-place team.

GET INVOLVED: PLEASE COME ALONG TO TRUST IN YELLOW QUIZ NIGHT TOMORROW

Tomorrow (Saturday), Trust in Yellow hosts the latest in our new Get Involved! programme of events with a quiz night after the home match against Dover Athletic.

The quiz will take place in the Grandstand Bar, starting at 5.30pm, so it is easy for fans to stay behind after the game.

All supporters are encouraged to attend for what promises to be a fun evening.

It is a team quiz - and your team can consist of as many players from two up to a maximum of six and entry is £1 per person.

It is designed to be a fun quiz, with rounds on general knowledge, music, TV and film, sport and, of course, Southport FC. There will be prizes for the winners and the event is expected to last around two hours.

Your team can be entered into the quiz at the event, so please come along to support the Trust.

As part of the Trust's role in bringing supporters together, it is the aim to put on at least one event after a home game every month during the season.

The Trust’s new Get Involved! programme began in August with a Meet the Manager with Paul Carden and the Class of ‘05 championship reunion.

To get as many people as possible involved, the Trust has chosen to host a range of different events, which continues with a race night on October 10 and a karaoke and disco in memory of supporter Mark Heaton on November 14.

Our next event is a Quiz Night on Saturday 5th September following the Dover game.

It is designed to be a fun quiz, with rounds on general knowledge, music, TV and film, sport and, of course, Southport FC.

There will be prizes for the winners and the event is expected to last around two hours. Teams can be entered at the event, but to help with arrangements the Trust would like as many teams as possible to register beforehand, so please e-mail fans@trustinyellow.com or visit the Trust office with your team and player details. Any number of players are allowed in each team up to a maximum of six and entry is £1 per person.

There will be a players team so this is your chance to show that you're smarter than a bunch of footballers!

The quiz will take place in the Grandstand Bar starting at 5.30pm and we look forward to seeing you there. 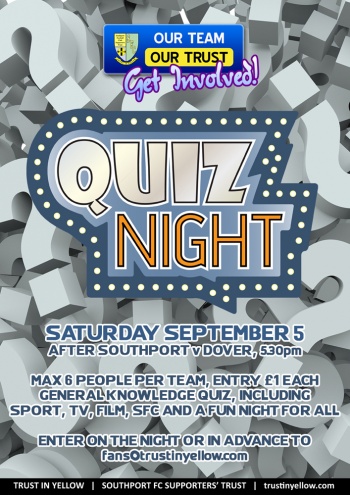 TRUST IN YELLOW SAYS THANK YOU 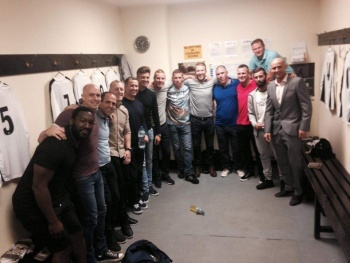 Trust in Yellow would like to thank everyone who played a part in today’s Class of 05 reunion.

The event was a huge success and it was a real privilege for us to have hosted it. A special thanks must go to Liam Watson and his 2005 title-winning team for their great involvement on the day and in the lead-up to the event. They are legends in every sense of the word.

The Trust would also like to thank everyone who volunteerd in various roles at today’s event, and to Rchard Brodie and all of the fans’ team for playing such a big role and for embracing everything about the event.

We were thrilled by the attendance at the match and in the bar, so thanks to everyone for supporting the Trust in great numbers.

Details of how to buy a DVD and photos of the event will be available shortly.

This was the second in our new Get Involved! programme of events. The next is a quiz night after the match against Dover Athletic on September 5 and we’d love to see you there.

One of the great successes of today was the range of different people who got involved. It is the Trust’s aim to represent the whole fan-base and we really want to see more people taking part in what we do.

More details about our work is available across our website. You can join online by following the link on our homepage, or come and see us on Saturday when, weather permitting, we’ll have a Trust table outside the Scarisbrick New Road end of the ground.