The next of the Trust’s monthly Saturday night events is on October 22 after the home match against Sutton United and is our popular annual Race Night.

We are looking for sponsors for the night. To sponsor a race costs just £25. To buy a horse for the races costs just £3 and to become a jockey £2.

To become a sponsor or buy a horse etc, come into the Trust Office on match days or see Noel Warham, Martin Robinson or any Trust board member.

You can also contact us by email at trustinyellow278@gmail.com or dmjrobinson@btinternet.com

Your host for the evening will be Tony Adams and we are sure that as in previous years the event will be great fun as well as raising valuable funds for the Trust.

We’re delighted that Trust in Yellow will feature prominently at all seven of Southport’s friendlies this pre-season.

As they prepare for the campaign ahead, Andy Bishop’s squad will play their warm-up matches in a brand new pre-season kit, which is part sponsored by the Trust.

It means that the Trust’s name will feature on the shorts and sleeves of every player this summer and it will also become the regular kit for friendlies in future seasons.

The Trust would like to thank club photographer Julia Urwin, who has kindly donated the funds raised from the use of her photos last season to cover the Trust’s contribution to the project.

Also sponsored by sportswear providers, Galaxy Football, the new kit, consisting of a pink shirt and black shorts, will be worn for the first time this Saturday, when Southport open their pre-season schedule away at Bootle.

Pictured with the new kit is Andy Bishop, the Southport manager, with Mark Parr of Galaxy Football (left) and Noel Warham, the Trust in Yellow vice chairman.

The new colours have been introduced after pre-season kits were used to raise money for charity in both 2013 and 2015.

After the visit to Bootle, the Sandgrounders travel to Chorley next Tuesday, July 12. Bishop’s team play at home for the first time against Bury on Saturday July 23, before the new National League season begins on Saturday August 6.

The end of season awards presentation, hosted by Trust in Yellow, takes place in the Grandstand Bar after the final match against Kidderminster Harriers on Saturday.

The event will start with a few words from Andy Bishop, who will speak to supporters for the first time since being appointed manager on a full-time basis this week.

The Trust is delighted that this season’s awards will be presented by club legend Colin Alty, who won the first Player of the Season award in 1966-67, when Southport won promotion to what is now League One.

Colin played 184 times for the Sandgrounders over six seasons during the golden era of the mid-1960s. He famously scored a last-minute winning goal in an FA Cup third round replay against Ipswich Town at Portman Road in January 1966 and also featured in the cup tie against Everton two years later.

The awards will be presented in the following order, finishing with the main Player of the Season award, as voted for by supporters.

April Player of the Month

Champion Newspapers Player of the Season

Players' Player of the Season

Phil Carder Goal of the Season

Fan of the Season

Player of the Season

The event will start as soon as the players are changed after the match, so please stay behind in the Grandstand Bar as we celebrate another season.

If you are unable to attend, then a live broadcast of the event will be available on Periscope.

The end of season awards presentation, hosted by Trust in Yellow, takes place in the Grandstand Bar following the final match of the season against Kidderminster Harriers on April 30. All supporters are welcome to attend.

The match against Kidderminster kick-off at 5.30pm and the presentation will be held straight after the match. 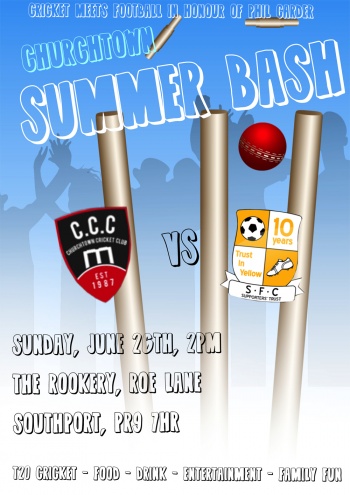 Churchtown Cricket Club will hold a Summer Bash at the Rookery, Roe Lane, on Sunday June 26.

The main part of the event will be a cricket match between Churchtown and a Trust in Yellow XI in memory of Phil Carder, the long-serving Churchtown chairman and Trust treasurer, who passed away last year.

Play will start at 2pm and the match will be 20 overs a side. It is designed to be a fun day, with the bar at the Rookery open and there will also be food, drink, entertainment and family fun.

If you are interested in playing for the Trust team, e-mail Martin Robinson at dmjrobinson@btinternet.com.

Funds will be raised for Queenscourt Hospice in Phil’s memory. If you would like to donate any items to the raffle, again please contact Martin.