The coach to Chester is now full. We have a small number of people on a waiting list so if anyone booked on the coach finds they cannot now go please will they text Bill Sloan on 07952056385 as soon as possible so we can offer their place to someone else.

We are also taking bookings for the next two away matches.

Prices are also £14 standard, £12 Trust members and season ticket holders and £9 under 16s.

Places can be booked by texting Bill Sloan, at the Trust Office on match days or online on the club's ticketing page. 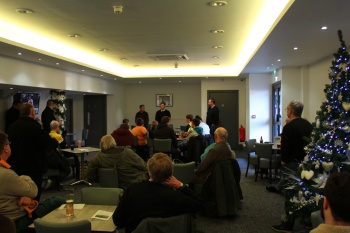 Ahead of the FA Trophy game against Chester, we held a question and answer session in the 1881 Lounge with manager Liam Watson and director Phil Hodgkinson.

Thanks to Liam and Phil for giving their time to speak to supporters and to all the fans who attended.

Trust in Yellow will be holding an hour long question and answer session with director Phil Hodgkinson and Manager Liam Watson at 12:30, at the 1881 Lounge on Saturday 24th November.

All supporters are welcome.

Some questions will be asked on behalf of those who cannot be present. Please e-mail, fans@trustinyellow.com.

The event had been initially pencilled in for the Leamington home match but due to progression in the cup, lack of home matches and the festive season it was decided to bring event forward.

25 years on from one of the finest seasons in Southport’s 137-year history, Trust in Yellow were delighted to welcome back many of the squad which brought treble success in 1992/93 and historic promotion to the then Vauxhall Conference after 15 years in the doldrums.

Over 120 supporters gathered in the club’s marquee after last Saturday’s game against Brackley Town to give an ovation to the side which brought much success and joy to the club in the 90s.

Witnessed by the current squad, the Trust also gave their own supporter voted awards for the season past. Jack Sampson won Player of the Season, presented by Kevin Mooney who was player of the year and captain 25 years ago.

Elliot Osbourne’s goal against York received the Phil Carder Goal of the season award. The award was presented by former Port favourite Leroy Dove and members of Phil’s family.

The Fan of the Season award was presented to Mike Billington’s family after fitting speech from TIY vice chairman Martin Robinson. Mike passed away earlier in the season and was cherished by all at Haig Avenue. His family were presented with the award by legendary goalscorer Steve Haw.

The Champion Newspapers Player of the Season presented by Ron Ellis was given to Jason Gilchrist.

An auction for a signed shirt and a quiz also featured with presentations from former manager and assistant of that side Steve Joel and midfielder Chris Walmsley. All raised vital funds for the Trust.

Young supporter Preston Rimmer was presented with a new drum to ensure a new generation of supporters can continue to be as vociferous.

The night was not complete without a fabulous rendition from Alan “Tintin” McDonald of “Oh When The Port!” which had the marquee in full voice and was a wonderful reminder of not only what a great team but what great characters Southport’s very own class of 1992.

Photos from the event are on the Trust's facebook page HERE.

Player and Goal of the Season voting is open

At Saturday's NPL champions reunion, we will also be holding the Trust in Yellow annual end of season awards and presenting a number of prizes.

Two of those are selected by you, the fans!

The first of those is the Trust in Yellow Fans’ Player of the Year and the second is the Phil Carder Trophy for the Fans’ Goal of the Season.

We’ve been tweeting out some of the contenders for Goal of the Season and will be showing you a few more.

You can vote for these awards in a variety of ways:

Everyone is entitled to ONE vote for each award and the closing date is 10pm on Friday April 20.

Tickets are still available for next Saturday but are selling fast.

You can buy these online HERE or in the Trust office at the game on Tuesday night.