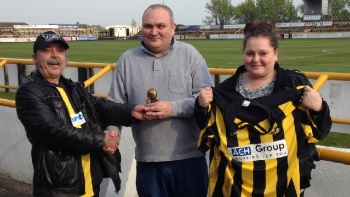 The Trusts balance currently stands at GBP24276. A payment of GBP1500 has been made to the club for primary school coaching and a limit of GBP4000 has been set for this project. A total of GBP510 has been spent on next match signs this season and coaches have run at a GBP242 loss thus far.

Membership is down to 210 however 3 new members have joined in the past month.

5. Report from meeting with the club

The recent meeting with the club was very positive with Charlie Clapham assuring the Trust that the floodlight project will go ahead this summer regardless of league status. The Football Stadia Improvement Fund is meeting on 23rd April and an application has been made that will be heard at this meeting. The club is seeking new quotes as the previous ones have are out of date. The coaching in primary schools is supposedly going on until the end of the season although the Trust is still waiting for official confirmation before releasing any more funds. The club did not want the Trust to apply for an Asset of Community Value for the ground as it was felt this may disrupt the excellent relationship with Sefton Council.

A questionnaire was recently sent out to members giving them a chance to give an opinion on coach travel. The issue of pricing was discussed and it was pointed out that whilst some Conference clubs may offer slightly cheaper coach travel they dont offer a concessionary price and have a larger fanbase which means they can price coaches on the provision that they will be full. The Trust has offered discounted trips to Tamworth which ran at a loss and Salisbury where the coach was barely half full. Suggestions from Trust members present included arriving at certain away matches earlier so people can bring partners, families etc and looking into the cost of a minibus. Arthur may be able to access a 26 seater coach from Vision and will look into the costs. Aside from the obvious reasons of atrocious away form and cheap train tickets, supporters were also put off travelling by uncouth behaviour most notably on the Leyton Orient trip and the fact that travelling by car offers more flexibility. It was agreed to advertise the Gateshead coach as GBP15 and GBP10 for members presuming that 40 people will travel.

7. Fan of the season

The deadline for nominations is 31st March and several have been received so far. A trophy will hopefully be presented to the winner at the clubs presentation night.

Unfortunately the Co-op energy scheme advertised on the Trusts website hasnt taken off as planned due to bad publicity received by the Co-op recently. The Buy a Brick scheme is still in the planning stage and the Trust hopes to hold an auction at the clubs end of season presentation night. Rob also put forward a fundraising idea whereby he will wear a Liverpool shirt on a matchday if GBP1000 is raised and for GBP10000 will sing Youll Never Walk Alone on the pitch.

Martin reported that 75p has been raised in the last week simply by supporters using Easysearch which donates half a penny to the Trust with each search. With commission also being given for each online purchase made through Easysearch this has the potential to raise a significant amount of money for the Trust annually once more supporters are aware of it.

Trust member Adam Cailler who works in social media has kindly got in touch with the Trust and made some recommendations on how to improve the use of the website as well as the Trusts Facebook and Twitter accounts. Some useful points were made which will be helpful in enhancing the Trusts interaction with supporters online.

Wrexham Supporters Trust have offered Trust members the chance to join them on their sponsored walk up Snowden on 29th June. Any members taking up their offer would be able to raise funds for Trust In Yellow.

5. Report from Trust meeting with club on 15th February.

a) Discussion on ways to encourage greater support of coach trips..

b) Planned coach trips for the remainder of the season.

7. Fan of the Season

8. Fundraising and other events.

All were covered further on in the agenda.

The Trust’s balance currently stands at £25,476. The Race Night in November raised £820 with £50 of sponsorship money from Merseyrail expected shortly. The Trust’s public liability events insurance has been renewed at an annual cost of £278 as well as Supporters Direct membership at £100. A total of £15000 remains in a six month fixed rate deposit which will yield interest of £130 upon maturity.

Membership has jumped to 235 after an influx of new members. A fair amount of these are juniors who have joined on coach trips.

After the abandonment of the Chester match on New Years Day, Arthur has very kindly offered to reduce the cost of hiring the coach to the re-arranged fixture by £100. Therefore it was agreed that those who had booked and paid in advance for the previous trip will be able to travel to this game for £5. A procedure was also agreed upon should an abandonment occur again in the future. Should it be a local fixture where no break is required for the driver then a vote will be taken over whether to attend another game or return home. Should the driver legally require a break then another game will be sought for supporters to attend. In other matters relating to travel it was unfortunately agreed that a weekend away is unviable this season due to prohibitive costs.

The Trust is still waiting for the club to agree to a date for a meeting to discuss off field developments. It is hoped however that this will take place sooner rather than later with the club having suggested it is looking at a major project in the near future.

With the aforementioned developments hopefully taking place this year it was agreed that fundraising was the major priority with plenty of ideas being suggested below.

8. Future fundraising and other events

A wide range of ideas were put forward by those present including a community day, an auction, a slave auction, a supporters game, a casino night, an Ebay shop, a games night with the players, auctioning off a place on the squad list and team photo and a buy a brick scheme. The committee will look into each of these before the next meeting with the aim of taking some of them forward and putting them on as fundraising events in the next 12 months.

The club have said that they would like the Trust to apply for an Asset of Community Value for the ground, although it is highly unlikely that it would ever need to be called upon. Members present were extremely uneasy on the possibility of Southport becoming a ‘feeder club,’ especially as it would probably be to a League One standard club at best. The Trust would also like fans to be able to vote on future kit designs as is done at several clubs including Chester and Macclesfield.

It was agreed by those present that the Trust doesn’t require a new badge at this time but thanks go out to those who put in time and effort to send in designs.

The new website is now live and all agreed that it looks superb. The Trust will send a formal thanks to Dan Hayes for all his hard work.

St John’s Primary School in Crossens are holding a sponsored walk in memory of Paul Comstive on Sunday 19th January which will take in the Merseyrail Community Stadium. It was suggested that refreshments could be provided at the ground and walkers could have a chance to do a lap of the pitch. The club will be consulted about this.

13. Dates of next meetings

7. Trust Priorities for 2014. What members think should be the Trust’s priorities this year.

8. Future fundraising and other events. Planned events and discussion of new ideas from board members and other members present

13. Dates of next meetings