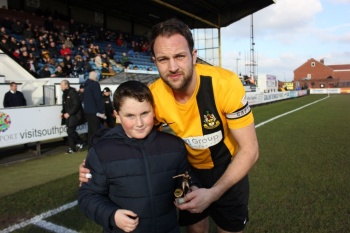 Defender Luke Foster has been voted the Trust in Yellow Player of the Month for January.

The Southport captain, who has had an excellent season since joining from Lincoln City last summer, came out on top in the supporters’ poll.

Foster has been runner-up for the award in a number of months this campaign and picks up the award after another set of commanding performances in January.

Foster was presented with his award by Southport fan Harry Hopkins ahead of Saturday’s draw with Macclesfield Town.

Supporters will have the chance to vote for February’s award at the end of the month.