BRODIE IS PLAYER OF THE MONTH FOR AUGUST 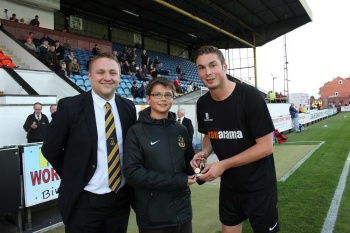 Richard Brodie has been voted Trust in Yellow’s Player of the Month for August.

The Southport striker won the award after beating team-mates Dominic Collins and Luke Foster in the supporters’ poll.

He was presented with his award ahead of the win against Kidderminster Harriers on Tuesday night by Southport supporter Kane Shaw.

With three goals, Brodie was Southport’s leading scorer in the first month of the season, capping a number of good performances by finding the target in the win over Altrincham and netting a brace against Telford United.

Thanks to everyone who voted. Supporters will be able to vote in September’s award at the end of the month, with the presentation again made by a supporter.