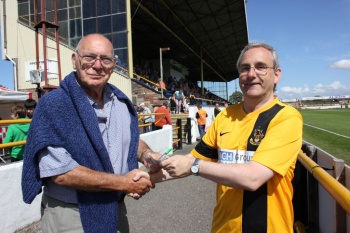 Before kick-off at Saturday’s opening match against Forest Green Rovers, a presentation was made by Trust in Yellow to supporter John Dennis as the winner of this summer’s World Cup Sweepstake.

Having been paired with Germany in a draw made by Southport manager Martin Foyle ahead of the tournament, John claimed the £100 cash prize after his country emerged victorious in Brazil.

Thanks to John and the other 31 fans who entered the sweepstake during the summer.

John was presented with his prize by Trust membership secretary Bill Sloan ahead of the weekend’s match.

John has kindly donated his winnings to the Liverpool Women’s Charity. More details on the charity can be found here.