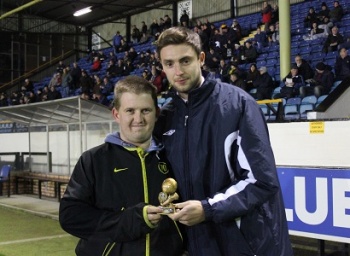 Left-back Chris Lever has been voted Southport’s Player of the Month for October by members of Trust in Yellow.

Lever, who is the longest-serving member of the current squad, scored three penalties during the month to take his goal-tally for the season to five.

He was presented with his award ahead of tonight's match against Wrexham by Trust member Dale Martin.

Lever is generally regarded as enjoying one of his best spells since joining the Sandgrounders in the summer of 2006.

He becomes the first winner of the Trust award, which will be voted on by members every month during the season.