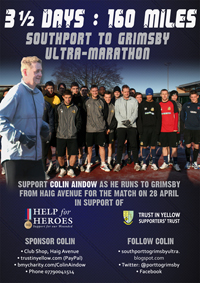 Colin will be leaving the ground at 8am next Wednesday (25 April), as he aims to complete a 163-mile run to Blundell Park in three-and-a-half days.

A lifelong Southport fan, Colin is undertaking this huge challenge in aid of Help for Heroes and Trust in Yellow’s floodlights project.

The Trust is extremely grateful to Colin for attempting such a demanding feat to help raise funds.

The run is the culmination of an intense training programme over several months, which has included running sessions with the Southport first team and the Blackpool Marathon in March.

The journey is the equivalent of six marathons, and will be tackled solo, unaided and carrying his own supplies.

Supporters will have the chance to sponsor Colin at Saturday’s home match against Ebbsfleet United.

To support Colin ahead of such this massive challenge, fans are being asked to give generously and provide him with all the encouragement possible.

To sponsor Colin online, please visit the link below: