TRAVEL WITH THE TRUST TO ALTRINCHAM

Bookings are being taken for the Trust in Yellow coach to Southport's away match at Altrincham on Friday 3 April.

The coach departs the Merseyrail Community Stadium, Haig Avenue, at 12.30pm, with a fare of £11 members, £6 juniors if paid in advance.

The board of Trust In Yellow have very regrettably been forced to cancel the proposed trip to Bristol on the weekend of the 11th April for our match at Bristol Rovers.

Unfortunately bookings did not match those for similar weekends in previous years and faced with a potential loss of up to £1000 it was felt that to be fair to all members of the Trust there was no alternative than to cancel the trip.

We are extremely sorry and apologise to those people who have booked and were looking forward to the weekend.

Any deposits made can be collected from the Trust Office at the next home matches. If this is inconvenient then please contact the Trust Treasurer, Colin Aindow at caindow@googlemail.com

For those still going independently the hotel we were going to was Bristol Central Travelodge. They obviously now have vacancies but unfortunately not at the reduced rates we had negotiated.

Any member wishing to discuss the trip can contact Martin Robinson, Vice Chairman at dmjrobinson@btinternet.com or ring him on 01484 719449.

Again our sincere apologies to those people disappointed by this cancellation

THE LUKE GEORGE BEARD IS SHAVED

Having placed the future of his beard in the hands of supporters, Southport midfielder Luke George underwent a shave on Saturday.

After three months of fundraising, fans voted for the midfielder’s beard to be removed, raising £1,151.76 in the process.

The beard was shaved in front of fans in the Grandstand Bar following Saturday’s draw against Nuneaton Town. The shave was started by young supporter Lewis Welsh and completed by fan Steve Wignall, who had donated to the campaign.

Supporters had donated since November based on whether they thought Luke’s trademark beard should be shaved or saved.

Of the money raised, over £900 will go to Diabetes UK, a charity nominated by Luke as his sister, Holly, who was present at the shave, has suffered from diabetes since the age of 12.

Trust in Yellow would like to thank Luke for taking on the project with such enthusiasm and to all the supporters who donated.

Photos of the shave are below. 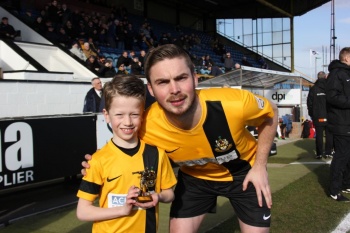 Richard Brodie has been voted the Trust in Yellow Player of the Month for February.

It is the third time this season that Brodie has picked up the award, having scored three times in the space of four games during the month.

The striker was presented with his award by Southport fan Cameron Ayres ahead of Saturday’s draw against Nuneaton Town.

Brodie came out on top in the supporters’ poll after a month which featured a number of fine performances, including an excellently-taken goal to earn Sothport a draw against second-placed Macclesfield Town.

Supporters will have the chance to vote for March’s award at the end of the month.

NO COACH TO WREXHAM

On Saturday March 07, 2015
Unfortunately there will be no coach running to Wrexham due to a lack of bookings.
Continue Reading