Minutes of Trust in Yellow Board Meeting - Wednesday 12 June

Minutes of Trust in Yellow Board Meeting - Wednesday 12 June

For the first time ever Southport FC will be playing their nine pre-season friendlies in a kit very different from their normal yellow and black. The club, and management, have very kindly agreed to Trust in Yellow organising the kit which will then be sold to the fans at the beginning of the 2013/14 season to raise money for Macmillan Cancer Support in memory of the late club photographer Sally Devine.

TAMES WINS GOAL OF THE SEASON

Congratulations to Steven Tames, who has received the award for Goal of the Season sponsored by Trust in Yellow.

Tames’ stunning goal at Hyde in August, which featured a run from the half-way line and fine 30-yard  strike, was chosen by supporters in a closely-fought vote.

Minutes of Trust in Yellow Board Meeting - Monday 15 April

The end of season presentation will no longer take place to raise funds for the Kevin Lee Appeal. The Trust will contact the club with a view to arranging an event in its place after the Luton Town match.

CHALMERS IS PLAYER OF THE MONTH FOR MARCH 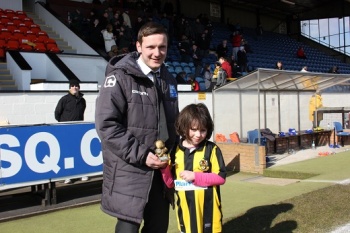 Aaron Chalmers has been voted the Trust in Yellow Supporters’ Player of the Month for March.

Chalmers, who has emerged as one of Southport’s most consistent performers in recent months, edged out Shaun Whalley and Godfrey Poku to win the award.

He received his presentation at half-time in the match against Alfreton Town on Bank Holiday Monday by Trust member Eleanor Taylor.

Since returning from a bad leg injury in February, Chalmers has established himself as a first-team regular, excelling after a switch to right-wing back.

He found the target in March in the defeat at Tamworth, adding to a fine free-kick scored against Woking the previous month.

Supporters will be able to vote for the final time this season at the end of April, with the presentation again made by a Trust member who votes for the winning player.