Trust in Yellow was formed on 26th April 2006. Since then Trust in Yellow has accrued an impressive 345 members at the time of writing. Trust in Yellow is indebted to all its’ members, which form the fabric of its very existence. The “Supporters trust” is a new concept to the football club, and each of those 345 owns an equal stake and say in the future of their supporters trust. 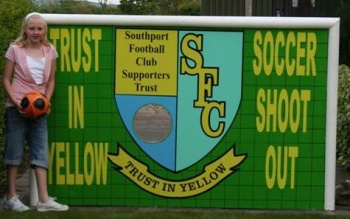 So what has Trust in Yellow done? Members may ask “Why should I rejoin?”

Following the midst of our official launch party the trust set about looking towards the future and forging a structure which would supplement the development of our football club with the intention of having an impact in the surrounding community.

As a result of an immediate brainstorming session, the trust worked in partnership with the football club by putting on a show at the 2006 Southport Carnival, subsequently having a stall in Victoria park officially unveiling its’ range of merchandise and continuing its’ membership recruitment. The end product of this partnership was two sponsor boards, which were erected in the ground; advertising the trust, the juniors and the club, with their respective websites and logo’s representing a partnership between the three entities.

The next step for Trust in Yellow was the formation of a travel club, which would provide a service for supporters in which the trust pledged not to subsidise or make a profit from. The service would provide supporters (and members at a significant discount) with the opportunity to travel to away games and support the team – something which was a focal part of the trusts’ objectives and had been missing in previous seasons.

In August the trust launched a brand new website www.trustinyellow.com and its’ own webshop which would allow supporters’ all over the world to buy merchandise, memberships, purchase tickets to events and book coach travel by credit or debit card – a first for Southport Football Club.

The trust also worked in close partnership with the football club, distributing fixture cards to public places across the town and in the surrounding areas – a total of 900.

September saw the trust have its’ first fundraiser - A race night, attracting over 100 supporters raising £1,500 towards existing funds. Paul Cook kindly allowing the players to join the evening, as the event doubled as a “Meet the players Session” Also Trust in Yellow in a joint effort with the football club, had a meeting with Sefton Council Technical Department, regarding the issue of road signs – the meeting initiated by local MP John Pugh.

October was the month, were Trust in Yellow began to raise the profile of the club with the imposition of signs advertising the clubs next match. Initially a sign was placed in the centre of the town on Lord Street, with thanks to the Shelbourne Hotel, this was quickly followed by signs on Queens Road and the Formby bypass.

November saw the trusts’ first EGM, an opportunity for the trust to form a committee. The trust initially appointed 12 committee members in accordance with its’ constitution. In addition to this the trust made its’ first acquisition of shares, allowing the trust access to the club AGM’s to raise supporter views. Trust in Yellow also took the decision to make a pledge to raise monies towards a mini bus, which would allow the club to arrange effective transport for the reserve and youth team, the reason why the reserve team had been culled the previous decision, with the full agreement of the quorum present.

December saw Trust in Yellow launch its’ Goalden lottery agent. Supporters and members a like could purchase Goalden goal tickets via Trust in Yellow. The trust receiving a percentage of commission towards its’ expanding funds.

January was the month were Trust in Yellow began raising the profile on the disproportionate charge quoted by Sefton Council for road signs, with articles in the local papers, radio and internet sites. Trust in Yellow acquired an impressive 700+ Signatures.

In February Trust in Yellow unleashed exciting plans to unveil a book, documenting 30 Years of Non League Football. The book is set to be released in August 2008, 30 years on from when the club began its’ life as a “Non league” club. The Trust also placed two large signs on either side of the Grandstand, stating the next match, part of a long term vision to increase awareness of the football club around the town.

In March trust switched its’ focus towards raising monies towards the mini bus appeal. A legends night featured stars of the clubs Golden Era in the mid 1960’s and early 1970’s and also members of the Northern Premier League winning side of 1992/93. This was a successful evening which raised over £700 towards the cause.

On Thursday 26th April Trust in Yellow had an auction, quiz, player of the year votes, all part of the 1st Birthday party celebrations. The event raised £1430 which will go towards the Mini Bus appeal.

On Saturday 3rd May 2007 Trust in Yellow will play host to a fixture between the 1st team and supporters. The result of the final 3 o’clock of the ‘Ports season is inconsequential, as supporters and players let their hair down with the focus on fundraising towards the trusts intended targets.

Having finished the season, Trust in Yellow will have provided a discounted service to supporters via their travel club on 17 out of 24 of the clubs senior fixtures. Given a season of turmoil, the southern based nature of the league and the fact that the club had struggled to run a sustainable travel club for a number of seasons, this is a superb achievement but one the trust will strive to better next season.

In June the trust will once more be at the Southport Carnival before embarking on another season of challenges, taking your football club forward.

Trust in Yellow has managed to raise over £7,000, strengthen relations with the football club, with a couple of its’ members taking up roles helping out with the club and also the trust thanks the local media whom have been great in developing a relationship and projecting the Trust in Yellow persona around the town in such a positive light. One of our aims is to raise £7,000 towards the acquisition of a mini bus towards reserve and youth team development.

Trust in Yellow is a long term initiative, and it is hoped that supporters will be patient as the trust hopes to make a difference and an impact on the long term future of our football club. The trust is conscious of taking money from the same pockets and we are currently putting together the final touches of a project which will see us contact each business within Southport, the PR8/PR9 postcode area.

By the start of next season trust in Yellow will have finished ongoing work on its’ own office which will be located in between the club shop and the turnstiles to the Jack Carr stand, selling memberships, merchandise, coach travel etc. This also gives a place for supporters to come and voice their opinions on club issues. Please do.

As an independent supporters trust, owned by its’ membership the trust hopes members will continue to offer their impetus and the trust is always open to how members want to spend their money and the trust continues to give supporters their opportunity to have a say in how their football club is run.

Annual Membership is just £10 and all members will receive a share certificate. Family Membership 2 adults and up to 3 children is £20. Corporate Membership is available for £100, contact Rob, details below, for more information.