TRAVEL TO TAMWORTH FOR JUST £8 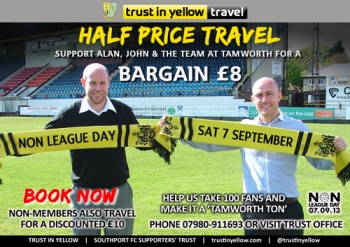 Saturday 7 September is Non-League Day - and to mark the event, Trust in Yellow is giving ALL fans the chance to travel to Southport’s match at Tamworth for half the usual price.

It means Trust members can book their coach seat to the game for a bargain £8 and non-members just £10.

With no Premier League or Championship football that day, Non-League Day was originally intended to introduce new fans to pyramid football. However, the Trust is hoping to use the event to boost Southport’s travelling support in one of the early-season fixtures.

Under new manager Alan Wright, the Sandgrounders will be aiming to make a strong start to the campaign, meaning the trip to Tamworth could be an interesting match.

If possible, the Trust will be looking to take two coaches to the Lamb, departing the Merseyrail Community Stadium, Haig Avenue, at 11am on 7 September.

Interest is expected to be high, so book your place now by calling Alan Scarisbrick on 07980911693 or visit the Trust office at the Scarisbrick New Road end of the ground.

To benefit from the half-price discount, you must pay in advance.