Following the excitement of the FA Cup victory the Trust feels this is an important time to build on the success both on and off the field...

The board of Trust In Yellow was pleased to hear that the long awaited floodlight scheme has started and that work should be completed in the next few weeks. The recent damage to one of the pylons on the popular side only confirmed how important it is to get new lights in place quickly.

It was back in 2010 that members voted to support such a scheme and TIY raised its share of the money required by May 2012. Originally we were told by the club that the lights were to be in place by the summer of 2011 but there have been various delays until this summer when the Trust, shareholders and supporters were told they would be installed by November. The Trust welcomed the sponsorship of County Insurance to cover the club’s share of the total cost. Following the latest delay the Trust wrote to the club asking for clarification. In particular we would like to know:- what were the reasons for this delay?

Has the Football Stadia Improvement Fund agreed to fund 50% of the scheme?

What will be the total cost of the project?

When is it envisaged that the new lights will first be used for a match?

It is hoped the club will agree to meet the Trust to discuss these points and perhaps long terms plans for any further ground improvements which the Trust can support with the club. Until the Trust knows what its financial commitments are with regards to the lights it is obviously impossible to plan its budget for the future.

NOVEMBER PLAYER OF THE MONTH GOES TO RUTHERFORD 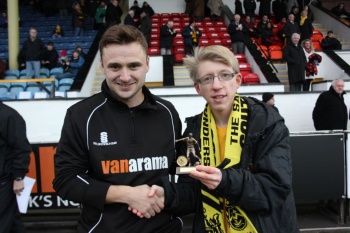 Paul Rutherford has been voted the Trust in Yellow Player of the Month for November.

It is the second month running that Rutherford has picked up the award, continuing the rich vein of form he has shown since the appointment of manager Gary Brabin at the start of October.

In a month that brought Southport success in the FA Cup as well a strong set of results in the Vanarama Conference, Rutherford beat off strong competition from a number of players including goalkeeper David Raya Martin, who finished a close second.

Rutherford was presented with his award by Southport fan and Trust member Philip Caven ahead of Saturday’s FA Trophy match against Wrexham.

The highlight of Rutherford’s month was probably the pivotal role he played in the win at Nuneaton Town, creating two of the Sandgrounders’ three goals, including one which saw him set off on a virtuoso run before setting up Richard Brodie.

Rutherford joins Brodie in having won the award twice this season.

Supporters will have the chance to vote for December’s award at the end of the month.

A fantastic 450 people have booked on the coaches so far. The Trust would like to urge all those who have not yet paid to do so as soon as possible so you can receive your travel tickets. This can be done in the club shop between 5pm and 7pm on Friday or in the Trust office at the Wrexham game on Boxing Day.

TRAVEL WITH THE TRUST TO DERBY

The Trust is giving fans the chance to travel to the FA Cup third round tie against Derby County for just £10.

We have reduced normal rates so supporters can buy their match ticket and travel all-in for £20, while concessions can purchase both for only £15.

The £10 fare is available to Trust members, while non-members can also benefit from a reduced fare of £15.

Take-up is expected to be very high so book your seats now by calling Alan Scarisbrick on 07980911693. You can also book by calling into the club shop on Friday from 5pm til 7.15pm, as well as before or after Saturdays home FA Trophy tie against Wrexham.

HATTERSLEY IS PLAYER OF THE MONTH FOR OCTOBER
Sunday November 03, 2013

CLOSING IN ON SECOND COACH TO LEYTON ORIENT
Saturday November 02, 2013