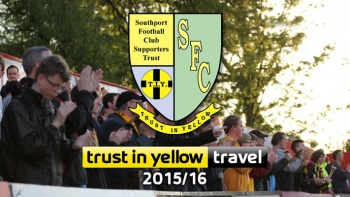 SHAVE IT OR SAVE IT
Trust in Yellow launches Luke George charity fundraiser tonight Tuesday November 25, 2014

WHO IS YOUR PLAYER OF A MAGNIFICENT MONTH?
Tuesday November 25, 2014

TRAVEL WITH THE TRUST TO DAGENHAM
Thursday October 30, 2014