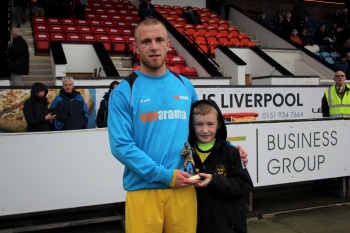 David Morgan has been voted the Trust in Yellow Player of the Month for February.

Morgan has been a key figure in Southport’s recent upturn in form, playing a central part in a month that saw the Sandgrounders collect maximum points from three games played.

The Belfast-born 23-year-old, who signed from Harrogate Town in September, has impressed in setting the tempo for the team’s performances from the middle of the pitch, also claiming a goal in the win at North Ferriby United.

Morgan was the winner of a closely-run supporters’ vote and was presented with his award by young supporter Cameron Hayes ahead of Saturday's win over Tamworth.

February Player of the Month

It's time to vote for your Player of the Month for February, and what an excellent month it was! A 100% win record and some excellent performances and goals makes this vote potentially very difficult!

You can vote by e-mailing fans@trustinyellow.com, on our facebook page or on our twitter feed. Get your votes in by Thursday 10pm.

The award will be presented before Saturday's home game against Tamworth, and as always we are looking for another junior supporter to present the award. 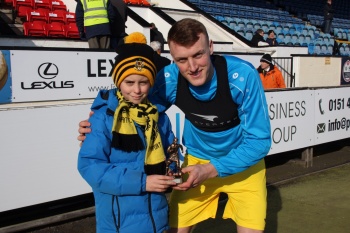 Coaches to Blyth and York

Unfortunately due to very low bookings we are unable to run a coach to Saturday’s match at Blyth Spartans.

The weather forecast is very poor for that area later in the week and it seems likely the match could be postponed anyway which may have deterred people from booking.

We did receive a generous donation from a member towards the cost of the coach but after discussion he agreed to move that forward to the York City coach so we are now in a position to say that this coach on Saturday 17th March will definitely run.