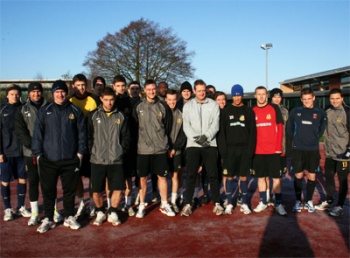 Trust in Yellow will be distributing sponsorship forms for Colin Aindow’s extraordinary run to Grimsby Town for the final game of the season ahead of tomorrow’s match against Hayes & Yeading United.

Unfortunately due to production difficulties at the printers, Trust in Yellow's "Southport's Great Eight" brochure won't be in the Club Shop in time for this afternoon's Club Shop Opening. The Trust are hoping it will be in in time for the Hayes & Yeading game but won't be able to confirm until later on today. Keep an eye on this section for an update.

The Trust apologise for any inconvenience caused. Advance orders have been excellent and you will still be able to call in and reserve a copy for when it is received. The worst case scenario is they will be received Monday.

It is hoped that the brochure to mark the club’s record-breaking eight consecutive away wins will be available for the remaining three home matches of the season.

The students from Edge Hill University were unable to film the home matches against Stockport County and Kettering Town due to commitments with their studies.

The Trust was thanked for its part in helping with the Stockport fans’ sponsored bike ride to Haig Avenue. 78 Stockport fans completed the bike ride.

A profit of £357 has been made on away travel and this will be used mainly to subsidise the coach to Grimsby.

Funds have recently been boosted by the commission from two winners of the club’s Goalden Lottery, while £243 has so far been donated to the Trust for Colin Aindow’s sponsored run to Grimsby Town on the final day of the season. The Trust hopes to make a good profit from sales of the DVD of the former players’ reunion which will be available shortly.

The current membership is 237 with 20 renewals due before the end of the season.

Colin Aindow recently completed the Blackpool Marathon as preparations continue for his run to Grimsby for the final game of the season. A push on sponsorships is still needed and flyers will be produced to distribute at the remaining home matches.

The last home match of the season against Ebbsfleet United on 21 April is Help for Heroes Day and this will be used to help publicise the run. The Trust will try to arrange another push in the local press over the next few weeks.

The coach to York City is full, meaning everyone who travels will be charged a reduced rate.

The planned weekend trip to York will not take place, mainly because the cost has proved prohibitive. The Trust is disappointed not to have arranged special coach travel to this match. The proposed early start was replaced by a weekend visit once the match at Braintree Town was postponed but in the end there were insufficient numbers.

The subsidised trip to Grimsby has resulted in 78 bookings and several new members joining the Trust. Bookings can still be made for the standard price of £15 members, £27 non-members, if paid in advance.

6. Floodlights project and communications with the club

Members were advised that the Trust had received a response from Charlie Clapham before the last board meeting, explaining that he hopes the club’s application for a Football Foundation grant will be submitted for consideration in April. The Trust will contact Mr Clapham before then to ensure the club is still working to the same timescale.

It is hoped that this event can be organised for the end of the summer. The Trust will make contact with a local organiser so arrangements can be made and details publicised.

8. Other fundraising and events

The Trust will contact club with a view to taking on the Player of the Season awards as no arrangements have yet been made. The cricket match is scheduled for 22 July and a quiz night will be arranged for the autumn.

The Trust’s AGM is due to take place before the end of August and members will be contacted with details in due course. 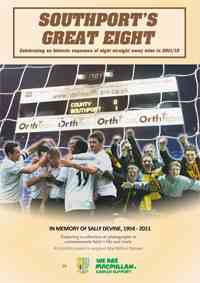 Trust In Yellow have produced a superb 36 page, A4 brochure to celebrate Southport’s Great Eight, the record breaking winning run of eight away games earlier this season.