TRUST IN YELLOW WEEKEND TRIP 2016 - WHERE WOULD YOU LIKE TO GO?

At their last meeting board members discussed possible venues for the weekend trip this season. We decided that this needed to be in the New Year probably February or later to avoid high possibilities of postponements. The trip would leave on the Friday afternoon and return on the Sunday. Possible destinations are:-

Saturday, 20th February - Lincoln: Very nice city but we have already had a weekend there

Saturday, 27th February - Grimsby: For those who fancy a weekend in Cleethorpes this also unfortunately clashes with the FA Trophy 4th Rnd

Saturday, 23rd April - Aldershot: To see one of our honorary members playing for the opposition!

One of those destinations stands out but the problem is whether ourselves or Torquay might reach the FA Trophy semifinal. If we were playing a semifinal at say Gateshead on that day the attractions of Torquay wouldn't be so great! And we might have large cancellations fees to face. Could we leave a booking until the New Year?

We would very much appreciate the thoughts of members especially those who are thinking of going on the trip Email your views to Martin Robinson at dmjrobinson@btinternet.com OR come into the Trust office to discuss it OR tell any Trust board member (for instance on one of our coach trips ) OR come along to the AGM. We would like to make a decision in early October if possible.

We need your views!

We still need a few more bookings to ensure this coach runs so please book your place now by calling or texting 07861 416859.

The fare is just £19 for members, £14 for juniors and £24 for non members which is a significant reduction in last season's prices.

The coach will depart the Merseyrail Community Stadium at 9.30am.

TRAVEL WITH US THIS SEPTEMBER 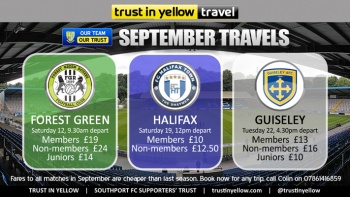 Thanks to all supporters who supported our coach travel in August, we hope that September will be a more fruitful month points wise! Our first trip of the month sees us head to Forest Green with prices at £19 for members, £24 for non members and £14 for junior members.

TRAVEL WITH US TO BARROW *COACH DEFINITELY RUNNING*

On Saturday August 29th Southport travel to Barrow and you can save the hassle of driving in the Bank Holiday traffic by booking on the TIY coach.

The coach will pick up at The Arion at 11.10am, and then at The Crown & The George before departing the Merseyrail Community Stadium at 11.30am.

NO COACH TO BRAINTREE

Unfortunately the coach to Braintree will not be running due to a potential loss of £400.