HURST IS FIRST PLAYER OF THE MONTH THIS SEASON 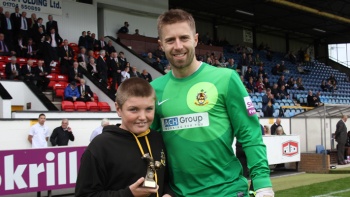 Goalkeeper Danny Hurst has been voted the Trust in Yellow Supporters’ Player of the Month for August / September.

Hurst, who joined the Sandgrounders in the summer from Barrow, has enjoyed an excellent start to the season and has been a model of consistency.

He has largely been regarded as Southport’s most impressive performer so far this campaign and was the clear winner in the fans’ poll.

The goalkeeper was presented with his award ahead of the match against Woking on Saturday by Trust member Liam Wells.

Hurst becomes the first winner of the Trust award this season, which will run throughout the campaign after successfully being introduced last year.

Supporters will be able to vote in October’s award at the end of the month, with the presentation again being made by a Trust member who votes for the winning player.