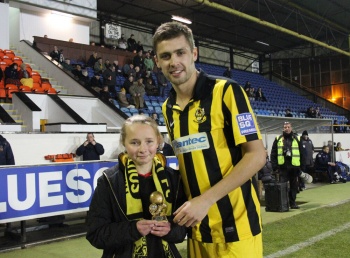 Trust in Yellow members have voted midfielder Karl Ledsham their Player of the Month for February.

It is the second time Ledsham has picked up the award this season, having also come out on top in the Trust's poll in December.

The 25-year-old was presented with his award by Trust member Kelsey Pye ahead of the match against Cambridge United on Tuesday night.

Ledsham scored twice during February, with both goals coming in the 5-2 win over Barrow, including a fine volley to take his tally for the season to ten.

Trust members will next have the chance to vote in March’s award at the end of the month.