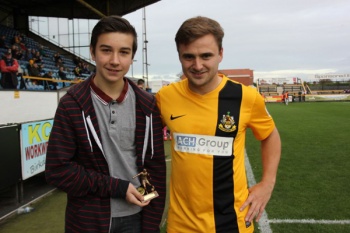 Paul Rutherford has been voted the Trust in Yellow Player of the Month for October.

In a month that brought a huge improvement for the Southport team under new manager Gary Brabin, Rutherford won a closely-run competition in which many players received nominations.

The winger came out on top by a single vote, edging out second-placed Luke Foster and several of his team-mates who were tied third in a well-supported poll.

Rutherford was presented with his award by Southport fan Jamie Hanlon ahead of Saturday’s match against Dover Athletic.

In many ways, Rutherford has epitomised the Sandgrounders’ revival under Brabin, turning in a series of tireless performances to show arguably his best form since joining from Barrow last summer.

Supporters will have the chance to vote for November’s award at the end of the month.