BRODIE IS SEPTEMBER'S PLAYER OF THE MONTH 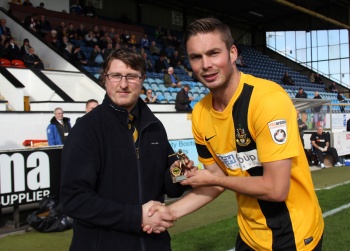 Striker Richard Brodie has been voted the Trust in Yellow fans’ Player of the Month for September.

Brodie, who also won the award in August, beat Joe Connor and Luke George to come out on top in the supporters’ poll.

The highlight of Brodie’s month was scoring the winning goal in the match at Grimsby Town, a result that brought to an end Southport’s 13-month and 28-match wait for an away win.

Brodie was presented with his award ahead of the match against Woking on Saturday by supporter and Trust member John Bennett.

John was chosen to present the award as one of the 15 Southport fans who made the trip to Grimsby and having been to all but two matches during the Sandgrounders’ away drought.

Fans will have the chance to vote in October’s award at the end of the month.